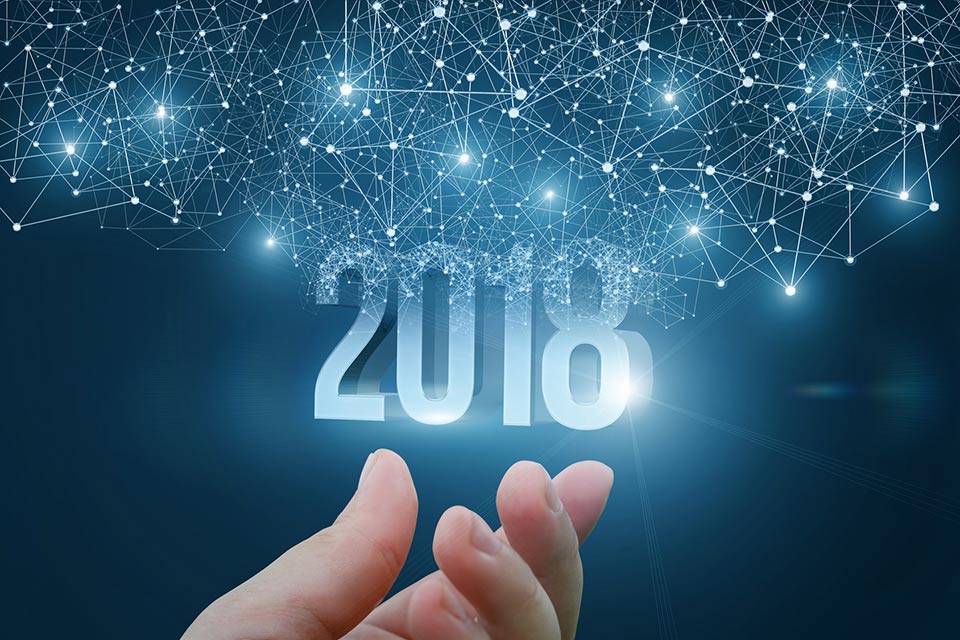 Let me start on a positive note to end the year. Thorsten Sok from DB came with good news: since December 2017, the financial crisis is OVER. Believe it or not.

So, what more can we expect in 2018? There will be more economic good news in the first half of the year, but the overall fundamentals are not so strong as we think. The public debt has never been so high as today, there is still a substantial lack of investments and there is almost no inflation. Despite the QE (Quantitative Easing) of central banks, prices remain low because of technology, people have too many tools to compare prices these days. Another important factor is the changing demographics. It is urgently time to redefine what means really a GDP (Gross Domestic Product) and is 2 % inflation really what we are seeking for? Why?

AI (Artificial Intelligence), IoT (Internet of Things), deep learning, MR (Mobile Robotics), blockchain will become more and more solid and affordable. Digital or crypto currencies, especially Bitcoin, were the topic of 2017. In 2018, you need to familiarize yourself with Ripple (had a much more spectacular growth than Bitcoin, btw), Cardano, IOTA… My major advice: as a manager, read the technology predictions and assimilate them. We are experiencing the Fourth Industrial Revolution, digital transformation and disruption are transforming companies and markets. In addition, oooh yeaah, the revolution is transforming your job and skills. Be prepared! So, continue to invest in developing your soft skills!

Beginning of the DE-Amazonisation: Modular Retail

Predictive marketing and increased personalization allows Amazon to know what you really want as a consumer. The traditional retailers are fighting back, online and offline needs to be inline. That is the motto to survive in the retailing industry. Modular retail allows store designers to deconstruct and reconstruct a physical store quickly, so it allows saving time by moving locations and saving costs, since they can re-use the materials. A pop-up café or a Cycle-in Cinema are good examples.

More of the circular economy

The world is still fighting with the Climate Agreement from Paris. The UN has set sustainability rules, so the circular economy does not allow product to become waste after their use and re-use them into secondary raw materials. There is a clear trendy opportunity for zero waste cookbooks or supermarkets, which is especially appreciated by the millennials. The economy has embraced it, hopefully our political leaders understand the message as well.

The “Me-too” campaign shocked the public in 2017. The storm is not over yet. It leads to more powerful female voices and the request for equal salary between men and women will become stronger. Most probably, following the “her-too” campaign, we will see more of “him-too” actions. Equality, Diversity and Inclusion. Embrace it.

This is a new word for:” Family and Friends, who I like”. Nothing special you think, well it happens daily on the Internet. I see these micro groups becoming micro segments, which is very hard and expensive for marketing professionals to reach.

My friend, Hamish McRae wrote in his book “The World in 2020”, that North and South Korea would unify before the end of 2020. He might have been damned right, since he wrote this already in 1994, in the first edition of his book. Let me add one more unification for the year. Following the BREXIT, Ireland and Northern Ireland will have a border again, since the UK is not part of the European Union (EU) anymore. In order to solve that issue, Northern Ireland will join Ireland to become one country. A very risky prediction, but Brexit creates many unexpected outcomes and March 2019, when the negotiating process should be over, is coming quicker than we all think. Or will there be no Brexit at all?

Wishing you all a Happy New Year!

Keep on having SBS learning FUN!