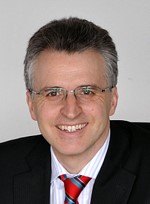 Paolo Varisco graduated from Zurich University with a Master in Finance and Business Administration. He is also a Swiss Certified Public Accountant.

Mr. Varisco started his professional career with the multinational Swiss Reinsurance Company (today Swiss Re) in the Group Internal Audit department for which he traveled abroad extensively. He then spent five years as CEO in an international medical assistance company that was undergoing a restructuring and repositioning phase.

In 2002, Mr. Varisco joined Converium Ltd, a Swiss-based reinsurance company with listings at the SWX and the NYSE. He built the Group’s Internal Audit department and, with his team, contributed to the successful design, implementation and operational testing of the requirements of the Sarbanes-Oxley Act, mainly sections 302 and 404.

In 2007 Mr. Varisco was appointed CEO/COO of the newly formed Zurich Hub of SCOR in Switzerland. In 2010 he restructured and reshaped the company’s HR function globally.

As of 2013 he has served as Independent Consultant on restructuring projects and as a lecturer. He is fluent in four languages and likes to interact with people from different cultural backgrounds.